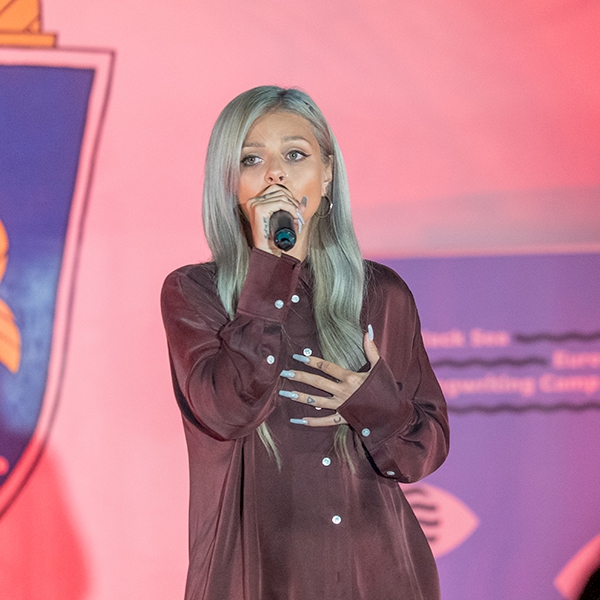 Bulgaria’s first Eurovision songwriting camp took place in Burgas and Primorsko between 16 and 26 August. The Black Sea Eurovision Songwriting Camp 2020 attracted over 25 artists, songwriters and music producers worked for 10 days in both cities, with music studios in Hotel Forest Beach in Primorsko, where they also stayed, and a music studio at the Sea Casino (Morskoto Kazino) in Burgas.

The event was supported by the fintech company iCard, who are the main sponsor of the 2020 and the 2021 Bulgarian participation in Eurovision, the Municipalities of Burgas and Primorsko, Forest Beach Hotel and BNR Burgas.

The Black Sea Eurovision Songwriting Camp 2020 was the first step in Victoria's Eurovision 2021 Eurovision journey to Rotterdam. The artist and the teams she worked with created 2 potential songs for Eurovision and 1 song for her upcoming album. Victoria worked with several songwriters and music producers, including Cesár Sampson from Austria, Borislav Milanov from Symphonix International, Lukas Oscar - one of the songwriters behind Teas Getting Sober, the popular Swedish artist and songwriter Skott, the Swedish-Bulgarian music producer Martin Masarov, Chris Samuels from Sweden, Joe Traxler from Austria and Olle Tidblom from Sweden.

Victoria also enjoyed several free days in the beautiful Burgas and Pirmorsko and visited the St. Anastasia Island close to Burgas, together with her fellow songwriters and artists.

The event also included two free public concerts in Burgas and Pirmorsko, something unusual for a songwriting camp. The concerts were initiated by Victoria, iCard and the Municipalities of Burgas and Primorsko and were a way for the artists and songwriters to thank their hosts from the two cities and to present something special for the tourists visiting Bulgaria.

Behind the scenes of the Black Sea Eurovision Songwriting Camp, including interviews with Victoria, Borislav Milanov from Symphonix, Genoveva Christova from Ligna Studios, Cesár Sampson and Martin Masarov and parts of the performances from the two concerts in Burgas and Primorsko: https://www.youtube.com/watch?v=BD8TFeSodgM

Victoria said about the Black Sea Eurovision Songwriting Camp 2020: "At Black Sea Eurovision Songwriting Camp I had the opportunity to work with many different artists, songwriters, composers - many different and colourful people. I think for now I have two favourites from the songs we've created that can be part of the Eurovision 2021 selection for Bulgaria. And I'm very happy that we've been able to write such strong songs. And I also have one that could make it into my upcoming album." . She also shared her gratitude on her Instagram to all organisers, songwriters, artists, sponsors and the hosts cities for making the songwriting camp a reality.

The organisers of the event are already in discussions for a possible Black Sea Eurovision Songwriting Camp in the summer of 2021.

You can share your feedback about VICTORIA’s songs at Bulgaria2021.com

WATCH NOW: “Growing Up Is Getting Old” by VICTORIA